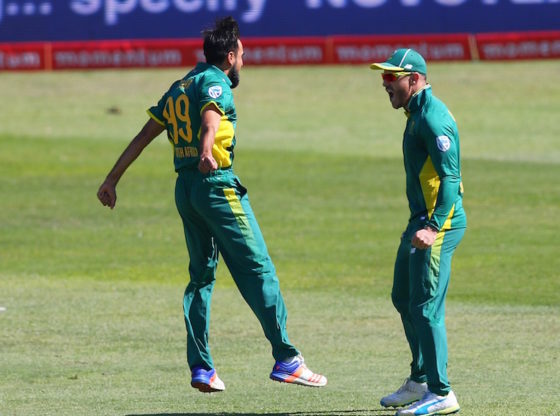 The Proteas batsmen need to increase their intensity to beat a well-balanced Pakistan outfit in the second ODI at Kingsmead, writes KHALID MOHIDIN.

After a disappointing defeat against Pakistan in the first ODI at St George’s Park, the Proteas travel to Duban aiming to level the series.

When looking at the Proteas’ scoresheet in Port Elizabeth – Hashim Amla (108 not out), Rassie van der Dussen (93) and Reeza Hendricks (46) – it is hard to believe that the home side lost the match. But having posted just 266 with eight wickets in hand, the shared belief among fans and pundits alike was that the Proteas were well short of a defendable total. This was proven by their five-wicket defeat as they became only the seventh team in ODI history to lose two or fewer wickets and lose the match.

Pakistan should be credited for the way they utilised their spin bowlers and medium pacers as the Proteas struggled to get the ball to the boundary and finished the match with an overall run rate of 5.32.

ALSO READ: The upsides of ODI loss to Pakistan

Looking at the Proteas side, it is difficult to draw out their philosophy or style of play in the 50-over format. In Test cricket, it is clear that they rely on their pace bowlers to launch their attacks and give them an edge. However, in ODIs, they still haven’t settled on a fixed XI.

The Durban wicket will once again test the Proteas batting lineup. It was famous for being a seamer’s paradise, but in recent times it’s hard to predict what the venue would produce. The consensus is that the pitch has changed over the years, so perhaps playing Tabraiz Shamsi and Imran Tahir would be a good option.

Kingsmead should play to Pakistan’s strengths. Similar to the conditions in PE, their medium pacers and spinners should make life hard for the opposition batsmen and if the Proteas persist with their seam-heavy lineup then plenty of runs should be on offer. This will definitely give the Proteas the necessary practice they need to combat an obvious weakness.

History favours the away side at Kingsmead. Out of six matches between the two sides, Pakistan have won four and South Africa just two. It has also generally been a low-scoring ground, with teams passing 300 only on five occasions, hence the emphasis will be on restricting the opposition scoring as much as possible.

Imran Tahir will be key for the Proteas. He struggled to hamper the Pakistan side in PE and finished with figures of 1-44. How Faf du Plessis utilises his star spinner will be essential to restricting a side who are comfortable against spin. The Proteas batsmen need to play more aggressively to take the scoreboard away from Pakistan if they bat first and to give their bowlers a chance to shut out the opposition. If they bat second it will expose the areas of improvement they need to focus on and test the depth of their batting unit. Nonetheless, they have to bat with more intensity and aggression in order to put the Pakistan bowlers under pressure.

Pakistan’s veteran Mohammad Hafeez is the obvious dangerman. The 38-year-old took the game away from the Proteas in the opening ODI and will be the key man for his side. Restricting the Proteas will be key, so the importance of Hasan Ali‘s variations and Shadab Khan’s spin will be essential to Pakistan’s chances to go 2-0 up.