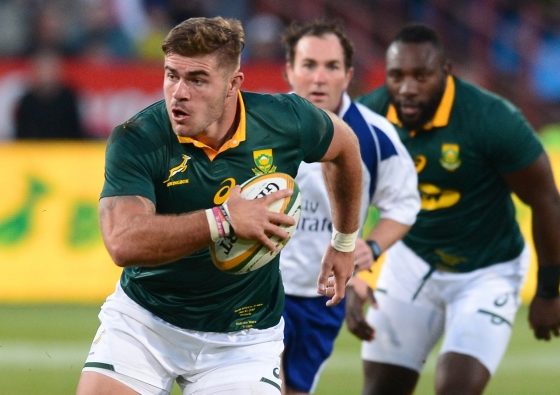 Malcolm Marx, Duane Vermeulen and Pieter-Steph du Toit will have game-shaping roles to play in the must-win Test against England at Twickenham this Saturday, writes JON CARDINELLI.

The Boks beat England 2-1 in the series in South Africa earlier this year. They then went on to score an upset win over the All Blacks in Wellington – their first Test victory in New Zealand in nine years.

There have been signs of progress in several areas. In terms of results, the 2018 season is shaping up as a relative success.

That could change, however, if the Boks lose three or four Tests on the tour of Europe and finish the year with a win record of less than 50%.

Neither England nor South Africa will be at full strength for the clash at Twickenham. The hosts are missing as many as 17 players due to injuries. With the game taking place outside the official international window, the Boks will be without England-based stars Willie le Roux, Faf de Klerk, Francois Louw and Franco Mostert.

Rassie Erasmus has been forced to make significant changes to his backline and pack as a result of those absences. Would the Bok coach have backed 20-year-old Damian Willemse to start his first Test at fullback and another rookie in Ivan van Zyl to start at scrumhalf at Twickenham if Le Roux and De Klerk were available?

Would Du Toit, the Boks’ standout performer in the Rugby Championship, have shifted to the second row if Lood de Jager was match-fit or if Mostert was free to play for the Boks?

Probably not. In an ideal world, Erasmus would have selected his strongest combination for the most important game of the tour. And after the side had secured a win against a depleted, undercooked and desperate England team, Erasmus may have had more freedom to experiment in subsequent tour matches.

Du Toit will start at No 5 this Saturday, while Vermeulen will make his return to the side – for the first time since June – at blindside flank. The pack selected for the challenge looks competitive on paper, but it will be interesting to see how long the players take to gel, especially in the back row.

As Vermeulen stated on Tuesday, the set pieces and breakdowns will be key. The forwards need to adapt to the conditions as well as referee Angus Gardner in order to secure the ball on attack.

On defence, players like Marx and Vermeulen should be looking to slow the opposition down at the rucks and secure the odd pilfer.

In the absence of Mostert, Du Toit will be tasked with orchestrating a superior lineout performance from the No 5 position. It wouldn’t surprise to see the Boks utilising their maul more often than not. As a stealer, Du Toit is one of the best in the business and the Boks should be looking to disrupt that England lineout unit this weekend.

Former Bulls coach John Mitchell would have given Eddie Jones a lot of inside information regarding Handré Pollard and the other Pretoria-based players. It will be interesting to see how the England side goes about putting those particular players under pressure – or indeed whether they can implement Mitchell’s methods after working with the Kiwi for a relatively short amount of time.

Schalk Brits has been recruited by the Boks for a similar reason. Erasmus feels that the hooker will add value as a player later on the tour. That said, the former Saracens man’s knowledge of the English conditions and players will be paramount ahead of the clash at Twickenham.

According to Marx, Brits has provided valuable intelligence in the leadup to the set-piece battle against England. The Boks need to put England under pressure in this area, and indeed the collisions and breakdowns, to have any chance of winning the game.

That will ensure that the Boks get on to the front foot. That will afford a largely inexperienced backline with a better opportunity to win territory and make the most of any scoring chances.

Pollard featured on the 2014 tour of Europe, and was one of the standouts for the Boks at the 2015 World Cup. Damian de Allende and Jesse Kriel are two more who should be used to the northern hemisphere conditions after featuring on several overseas sojourns.

Van Zyl, Aphiwe Dyantyi, S’bu Nkosi and Willemse – all of whom will be playing for the first time in this part of the world – will have everything to prove. How the latter three deal with Ben Youngs’ box kicks and Owen Farrell’s high balls will be game-shaping.

A big crowd is expected at Twickenham on Saturday, and if the England forwards gather some early momentum, it could be a long afternoon for the visitors.

The Boks shouldn’t want for grunt or motivation up front, though. If the forwards dominate as they did in the first two Tests against England in June, if Pollard kicks his goals, and if the younger players out wide manage the pressure smartly, then the Boks will come through this challenge with a valuable win.

Preview: Japan vs All Blacks
Watch: Bet on Boks to beat England