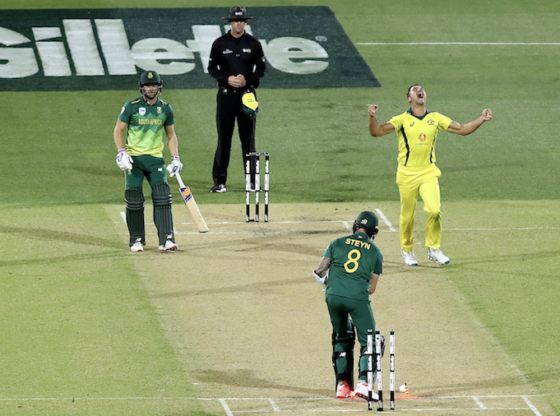 The Proteas take on Australia in the third ODI at Hobart on Sunday. It’s a massive game for South Africa, as a series win over their hosts is a must given Australia’s recent cricketing struggles. South Africa need the win for the morale-boost it will provide, as well as for the impact it will have on the psyche of the Australians.

If Australia win the series it could be just what the doctor ordered – the perfect pick-me-up for them to click into gear as they head into World Cup year, with Steve Smith and David Warner set to return to the fold in a few months.

Sadly, that’s what made the Proteas’ loss in Adelaide so tragic in sporting terms: it has given a wounded animal the opportunity to escape, rather than being put out of its misery.

Kagiso Rabada’s four wickets – albeit that he took some tap from Chris Lynn – once again underlined his truly world-class status, while Dwaine Pretorius proved his value with the ball, taking 3-32. Pretorius would be livid with himself, however, for giving his wicket away cheaply with South African needing 58 runs from 71 balls, as it offered him the perfect platform on which to build his reputation with the bat.

For their part, Australia will be buoyed by having successfully defended 231, and their power-packed pace attack, in particular, will have a real spring in their step. The challenge for them will be to lift themselves physically to repeat the act in Hobart after a break of just one day, although the Proteas pacemen will face the same challenge.

South Africa have played 599 ODIs, winning 369, losing 208 and playing out six tied matches. They have the highest win percentage of any cricketing nation at 63.80%, narrowly pipping Australia on 63.51%.

Australia have played 918 ODIs, which is second only to India, who have played 953 ODIs with a win percentage of 54.38%.

Andile Phehlukwayo needs to be brought back in and given the chance to put some runs on the board to back up his string of wickets, with Hobart’s flatter track being perfect for him to work his line and length against the Aussie top order. David Miller has been in terrific form with the bat but will be desperate to put a match-winning total on the board to convince the selectors (and perhaps even himself) that he’s an automatic choice for the World Cup squad. I’ll fancy him to get close to three figures in the series decider.

Australia Probable XI
Having finally picked up an ODI win after a record-breaking string of losses, there’s little chance of a change in the Aussie line-up.

Proteas Probable XI
There’s little wiggle room for the Proteas, and with the series level at 1-1, now is not the time for experimenting. Dwaine Pretorius picked up three wickets in Adelaide, but his failure to convert with the bat must count again, as it’s runs which are proving the Proteas’ downfall. Andile Phehlukwayo is a regular performer with the ball and offers good value with the bat. The selectors need to give him a chance to show what he can do in pressure situations.

Heinrich Klaasen is a vital understudy for Quinton de Kock, but he’s fallen caught at midwicket yet again when he needs to be carving out those not outs. He has such talent that when he can add that to his game at international level then he will be a real force. Without having put regular runs on the board his place is by no means secured, so it would be worth taking a gamble on the experience and firepower of Farhaan Behardien for this crucial clash.

Back Boks to beat France by four-plus points
Scotland vs Springboks: Predict and WIN!