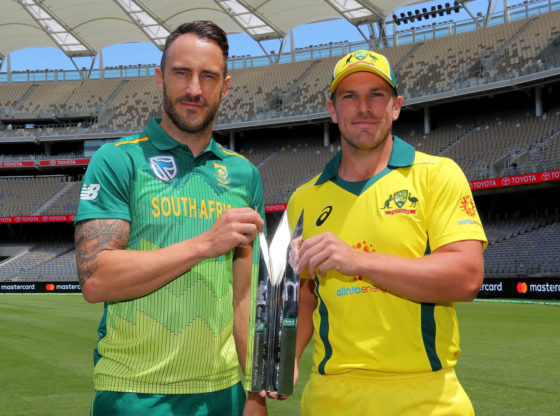 The Australia tour serves as a massive final test for the struggling Proteas batsmen, starting with the opening clash in Perth, writes KHALID MOHIDIN.

The Proteas take on Australia in the first ODI of their final experimental series.

With two key men – Hashim Amla and JP Duminy – out injured, there is another chance for Aiden Markram and Reeza Hendricks to stake a claim for a permanent position in the side.

Chris Morris and Dwaine Pretorius’ inclusion means that the Proteas are still focused on finding the perfect all-rounder, while Farhaan Behardien’s return to the set-up implies that Ottis Gibson and his staff are not happy with their big-hitting options.

The Proteas batting department will be under the spotlight. The top five, in particular, have struggled to find their groove and will face the perfect test against the Australian pace attack on hard, fast green tops.

Although the Proteas beat Sri Lanka and Zimbabwe in their recent ODI series, it was their bowlers who stepped up and saved them in their last six wins. The return of Dale Steyn added to the fierceness of the bowling attack, as Kagiso Rabada and Lungi Ngidi continue to build a lethal partnership. The bowling unit will this time be aided by the Australian conditions, which are similar to those the Proteas experience at home.

Based on their recent performances, Australia don’t pose the usual threat, with all the coverage in the media implying that the ball-tampering debacle has changed the ethos of Australian Cricket and softened their bite.

It will be interesting to see whether they will play with the same aggression that Aussie sides have been known for over the years.

Australia last hosted South Africa for a bilateral ODI series in November 2014, which Australia won 4-1. This hasn’t fooled the Proteas players, who are expecting a fierce battle against a new-look Australia side.

The Aussies have not been at their best in recent times, having not won an ODI series since they hosted Pakistan in January 2017. Since then, they have lost 15 ODIs and won just two, losing four series in a row. Although they took the Ashes from England in the red-ball series Down Under, England won the white-ball series 4-1, and then went one better six months later when they hosted Australia and hammered them 5-0, which included the highest ODI score in history, 481-6.

Quinton de Kock needs to step up and put a big score on the board. There hasn’t been any pressure on his place in the side, with limited world-class wicketkeeper-batsmen around South Africa who can challenge him for his place. While his keeping has been of the highest standard, it’s his batting that hasn’t been at the level we have come to expect from him. The rise of Heinrich Klaasen has put pressure on his place as the designated wicketkeeper-batsman from a run-scoring perspective, with De Kock needing a string of good performances with the bat to boost his confidence.

Australia’s batting unit has also been under the radar, especially after the ball-tampering incident forced them to replace world-class stalwarts David Warner and Steve Smith. The banning of the Newlands Trio also forced Australia to pick a new captain – Aaron Finch. The Australia skipper faced an injury scare after taking a blow to his finger during training earlier in the week, but has since been cleared to play. It will be an interesting battle between him and the Proteas’ fierce pace attack.

• Faf du Plessis has scored 798 of his 4,511 ODI runs against the Aussies, more than any of his current teammates.

• De Kock holds Proteas’ highest ODI score against the Australians, 178 off 113 deliveries (16 fours and 11 sixes) at SuperSport Park in Centurion in September 2016.

• David Miller’s ODI average of 46.33 against the Aussies is almost 10 runs superior to his overall aggregate of 36.97. He sports 417 runs in 13 innings, including one century and two half-tons, against the old enemy.

• De Kock has struck South Africa’s most ODI sixes against Australia, hitting 11 of his total of 15  his 178.

• Steyn has the existing squad’s most ODI wickets – and best bowling average – against Australia. His 42 wickets in two dozen appearances have come at a 29.14 average, almost three runs more than his career 26.16.

• South Africa have met Australia 96 times in ODI cricket. The Proteas have won 45 and lost 47, with three ties and one no-result. Their last 10 clashes have brought the South Africans six victories. Their first 10, from 1992 to 1994, yielded the same number of wins for the Proteas.

How to make some money from the Boks
Preview: Australia vs Proteas (2nd ODI)