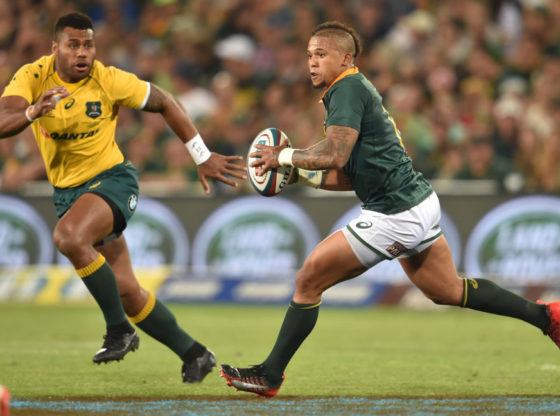 JON CARDINELLI looks ahead to another dance of the desperates featuring the Wallabies and Springboks in Brisbane.

The Boks come into this game on the back of a record 32-19 loss to Argentina in Mendoza. Coach Rassie Erasmus has responded to that defeat by making six changes as well as a positional switch to his starting side.

The South Africans shouldn’t want for motivation this week. They’ve won three of their last 16 matches overseas, and only one of their last nine Tests on Australian soil. They must be desperate to show the rugby world that they aren’t soft touches away from home.

The Boks will front an equally desperate Wallabies side this week. Michael Cheika has guided the Australians to just 25 wins in 50 Tests since taking the reins in late 2014. The coach is under pressure to produce some significant results in the wake of a series loss to Ireland at home and two big defeats to the All Blacks.

Cheika will be hoping that star fullback Israel Folau comes through a final barrage of fitness tests over the next day or so. The Wallabies will need Folau to compete in the air against the Bok back three, and to threaten that suspect South African defence out wide.

Both coaches have made some interesting calls at flyhalf and in the midfield. We’ll get to that in a minute. The most important battle will take place up front, and how Erasmus and Cheika deploy their forwards reserves in the second stanza could determine the result.

The inclusion of David Pocock is massive. The turnover specialist has been cleared of injury and will start at No 8 on Saturday. The Boks will need to neutralise the Pocock threat at the breakdown, as the All Blacks did in Auckland, to have any chance of dictating the pace and claiming a morale-boosting win.

Erasmus has opted to bench Malcolm Marx for this encounter and start with a back row devoid of loose forwards that play to the ball. Siya Kolisi is back at openside, yet the player himself has admitted that fetching is not his speciality. Pieter-Steph du Toit will bring some grunt to the blindside role in terms of ball-carrying and defence, and like Warren Whiteley will offer an excellent lineout option. Neither Du Toit or Whiteley are known for their breakdown exploits, though.

It will be interesting to see when Erasmus brings Marx on for Bongi Mbonambi this Saturday, and when the only genuine openside in the match-day squad, Francois Louw, is deployed. Louw is better suited to a battle in the trenches than an open contest, and may struggle if he is brought on in a situation where the Boks are chasing the game.

BREYTON PAULSE: ‘There will be ups and downs’

It’s been suggested that Erasmus is saving some of his best players for the clash against the All Blacks in Wellington. Handré Pollard, who looked every bit the general in the first two Tests against England but battled with his goal-kicking against Argentina, could be back in the starting lineup next week. That said, an outstanding showing by Elton Jantjies against the Wallabies will give Erasmus food for thought.

Jantjies will be under pressure to convert South Africa’s opportunities in front of goal this Saturday. Defence has been a problem for the Boks this season, and it will be interesting to see how Jantjies – statistically one of the worst defenders in the recent Super Rugby tournament – handles the Wallabies assault this weekend.

Indeed, the 9-10-12-13 combination of Faf de Klerk, Jantjies, Damian de Allende and Jesse Kriel will have plenty to prove on defence, especially if the Bok forwards fail to fire. That 10-12 channel should see a lot of traffic.

Cheika has dropped regular flyhalf Bernard Foley for this match. Kurtley Beale, one of the chief tormentors of the Bok defence in 2017, has been backed to start at No 10. Matt Toomua will ask questions of the South African midfield, while the hulking forms of Folau, Dayne Haylett-Petty and Marika Koroibete will test the Boks out wide.

The pitch at Suncorp Stadium is conducive to running rugby, and the ground has witnessed many fast-paced encounters in recent times. Rain is expected before kickoff this Saturday, however, and both teams may have to adjust their tactics as a result.

Cheslin Kolbe should make his debut from the bench. While there’s no denying the former Stormers player’s running ability, his lack of height and size may count against him – and the Boks – in an aerial battle against the likes of Folau, Haylett-Petty and Koroibete. Indeed, even those in the starting back three will have a lot to prove after some shaky showings under the high ball in recent fixtures.

o Each of the last two Tests between Australia and South Africa have ended in a draw; their solitary draw prior to that was in 2001 – only against New Zealand (seven) have Australia drawn more matches.

o Australia have lost just one of their last nine Tests against South Africa in Australia (won seven, drawn one), remaining undefeated against them on home soil since 2013.

o Australia have won their last four games on the bounce at Suncorp Stadium, including two when they had been trailing at half-time; only at the Sydney Cricket Ground (31) and Ballymore Stadium (29) do the Wallabies have more overall Test wins than they do at Suncorp Stadium (23).

o Australia have only one Test triumph to their name so far in 2018 (lost four). The last time they won fewer than five Tests in a calendar year was in 1995 (won four, lost four).

o Australia have won 100% of their scrums in six of their last seven matches, overall winning 41 of 43 scrums in that time.

o Australia’s David Pocock and South Africa’s Malcolm Marx have each won six turnovers in 2018, more than any other players in the tournament.

Currie Cup preview (Round 3)
Preview: All Blacks vs Argentina