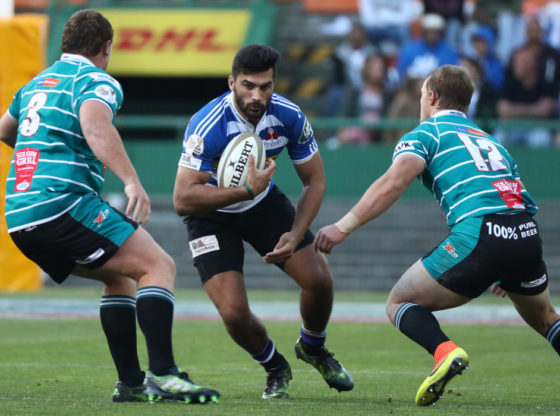 A number of returning Boks will be looking to make their mark in the third round of the Currie Cup, writes CRAIG LEWIS.

In this opening clash of the weekend, it’s worth noting that Damian de Allende will make his return from injury to form a midfield partnership with Blitzboks star Ruhan Nel, who himself has made no secret of his Springbok ambitions.

De Allende started the first two Tests against England in June, but then suffered an unfortunate injury during the latter stages of Super Rugby.

The selection of the 26-year-old for WP is an indication that he won’t be travelling with the Boks for the Australasian leg of the Rugby Championship, but he will be determined to rediscover top form quickly in order to win back his place for the latter stages of that competition.

Wilco Louw has also returned to domestic action, and will want to make his presence felt, while Sikhumbuzo Notshe is another Bok who must make the most of the Currie Cup game time he’s receiving.

Looking beyond this subplot, Province will know that the Pumas are sure to pose a serious threat on their home ground, but the fact remains that the Nelspruit-based side has only managed two Currie Cup wins over WP in 21 years.

The Cheetahs have made wholesale changes to their side as they again face the challenge of splitting their player resources between Currie Cup and Pro14 duty.

Rudy Paige will lead a youthful side into action, and while the Cheetahs do have home-ground advantage in their favour, they will be up against the odds as they get set to face a powerful Sharks side.

Several players such as Dan du Preez, Curwin Bosch and Rob du Preez have been on the fringes of the Bok squad, and they will be hoping to inspire the Sharks to another bonus-point win after a strong start to the Currie Cup last weekend.

The Cheetahs have suffered two defeats at the start of the tournament, and could well be set to face another heavy loss that would leave them rooted to the bottom of the table.

This should be an intriguing clash between two capable sides, with the Blue Bulls having been boosted by the return of fit-again Trevor Nyakane, while Lionel Mapoe is back with the Golden Lions after scoring two tries for the Springboks last Saturday.

Nyakane was set to start at tighthead prop for the Boks against England before he was unfortunately ruled out with a rib injury, and so there is no doubt that his performance will garner the attention of Rassie Erasmus.

It will also be interesting to see how much game time Ivan van Zyl is afforded off the bench after Embrose Papier was preferred as the scrumhalf backup in the first two Tests of the Rugby Championship.

Mapoe’s return to the Lions is relatively surprising after his encouraging display in Argentina, but the plan had always been for Jesse Kriel to rejoin the Springboks for this next leg of their campaign, and he will conversely be missed by the Bulls.

Last week, Bok attack consultant Swys de Bruin completed a hand-over of sorts to Currie Cup coach Ivan van Rooyen, who will be looking to oversee a second successive victory after the Lions powered past the Griquas last weekend.

The Bulls have started off their season with a win and a loss, and remain slight underdogs heading into Saturday’s encounter at Loftus.