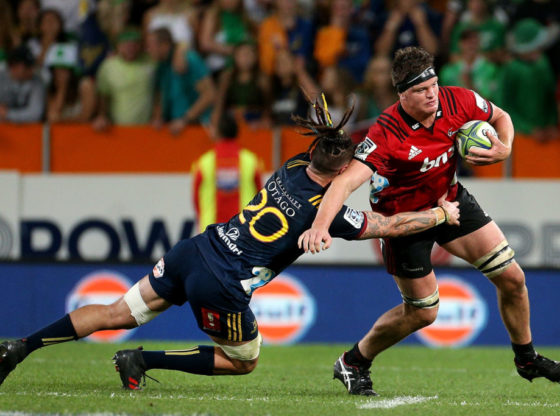 JON CARDINELLI looks ahead to the first four matches of round 18, including the big New Zealand derby in Christchurch.

CRUSADERS vs HIGHLANDERS (Friday, 9:35am)

On Friday, Crusaders and All Blacks prop Wyatt Crockett will become the first player in Super Rugby history to play 200 games. While there has been a lot of hype around the milestone, coach Scott Robertson has decided to pick Crockett on the bench.

A more sentimental coach may have given Crockett a starting run. Robertson’s selection policy, however, suggests that the Crusaders are focused on taking an unassailable lead at the top of the overall standings.

The Crusaders beat the Lions at Ellis Park in last year’s final. In doing so, they became the first side to traverse the Indian Ocean and win the Super Rugby decider.

Afterwards, Robertson spoke about the challenges associated with that journey. The Crusaders would prefer to play that all-important match at home this year.

A win against the Highlanders would guarantee them home advantage in the playoffs. Not many teams win knockout games in Christchurch, and you’d have to say that the Crusaders are hot favourites to claim the title from here.

Aaron Mauger’s charges managed to down the Crusaders earlier in the competition but have lost momentum since. By contrast, the Crusaders have won 10 games in a row.

Not that they needed it, but the Crusaders received a double boost this week. Captain Sam Whitelock and All Blacks No 8 Kieran Read have returned after recovering from their respective injuries.

The Highlanders are coming off a bad loss to the Chiefs in Fiji. Their defence, which is typically solid, let them down badly on that occasion.

They will be up against the best-balanced side in the tournament on Friday. According to Opta Stats, the Crusaders rank second for tries scored as well as for tackle efficiency.

The Highlanders could improve their chances of hosting a quarter-final with a victory in Christchurch. Given their recent form, however, that outcome is unlikely.

– The Crusaders have won nine of their last 12 games against the Highlanders, although they were defeated 25-17 when they met earlier this season.

– The Crusaders have won their last 10 games on the bounce – the last time they lost was in the fifth round against the Highlanders.

– The Highlanders have won three of their last five games away from home, with two of those three victories coming after they had trailed at half-time.

– The Highlanders have scored 11 tries this season after winning a turnover, only the Chiefs (12) have scored more tries via this method.

The Reds will be playing for nothing but pride in the final two weeks of the regular season. At this point, they look set to finish at the bottom of the Australian pile.

Meanwhile, the Rebels have to win in Brisbane to keep their slim hopes of featuring in the playoffs – for the first time – alive. They played well in patches against the Waratahs last week, but will need to be more consistent to emerge with the victory on Friday.

The Rebels’ defence, as well as their discipline, has let them down in 2018. They rank last in the tournament for tackle efficiency and have conceded the most penalties to date.

Will the Reds make the Rebels pay this Friday, though? The Reds rank in the bottom three across all major attacking categories. No team has scored fewer tries or points this season.

It promises to be a close game. The Rebels must show more composure, with ball in hand and in front of goal, to win the match and stay in the playoff race.

– The Rebels have won five of their last eight games against the Reds, including a 45-19 victory when they met earlier this season; they had never defeated the Queensland side prior to this run (lost six).

– The Reds have won only one of their last 10 games, and have lost their last five on the bounce; the last time they lost more in succession was a six-game drought in early 2017.

– The Rebels have won half of their previous 14 Australian derbies away from home; however, they’ve never won such a fixture by a margin of more than seven points.

– The Rebels are the most penalised team in the competition this season, conceding an average of 11 penalties per game.

– Samu Kerevi has scored four tries and assisted one in his last three games against the Rebels, crossing at least once in each of those games.

CHIEFS vs BRUMBIES (Saturday, 7:15am)

Both of these teams surprised in round 17. The Chiefs thumped the more fancied Highlanders in Suva, while the Brumbies downed the – admittedly weakened – Hurricanes in Canberra.

The Chiefs could strengthen their bid for a home playoff with another big victory this Saturday. They have the pack to challenge the Brumbies, and they certainly have the firepower out wide to conquer a mediocre defensive line.

They may also have a point to prove after their two-paced performance last week. The Chiefs scored 42 points and six tries against the Highlanders in the first half, but only a solitary penalty goal in the second.

A bonus-point win for the Chiefs would keep the heat on the Hurricanes, who are currently in a position to finish fourth on the overall log and host a playoff.

– The Chiefs have won their last three games on the bounce against the Brumbies, their longest ever winning streak against the Canberrans.

– The Chiefs have won 12 of their last 13 games against Australian opposition, including their last eight on the bounce by an average margin of 21 points.

– The Brumbies have won their last three games on the bounce; the last time they won more was a four-game streak from May to July 2016.

– The Chiefs have made 15 clean breaks and 13 offloads per game this season, the most of any team in the competition in either category.

– Andy Muirhead has crossed for a try in each of the Brumbies’ last three games after scoring in only one of his previous nine games for the franchise.

HURRICANES vs BLUES (Saturday, 9:35am)

The Hurricanes blew a big opportunity when they went down to the Brumbies in Canberra last week. They won’t win the New Zealand conference from here, unless they win big in the next two weeks and a couple of other results go their way.

There is still a lot to play for, though. The Hurricanes will be looking to lock down a home quarter-final. They should view a match against the battling Blues as an opportunity to score a win and put some daylight between themselves and the other sides vying for a fourth-place finish in the overall standings.

The Blues sit at the bottom of the New Zealand conference, and in 13th place on the overall log. Their stats tell a story of a side that has failed on attack and defence in 2018.

They may battle to breach the Hurricanes to any telling degree this Saturday. The Hurricanes have the best tackle-success rate in the tournament, and have missed the second-fewest tackles.

The Blues defence will come under fire at the Cake Tin. The Hurricanes have averaged 29 points and four tries per game this season.

The Hurricanes may be disappointed if they don’t emerge from this clash with a bonus-point win.