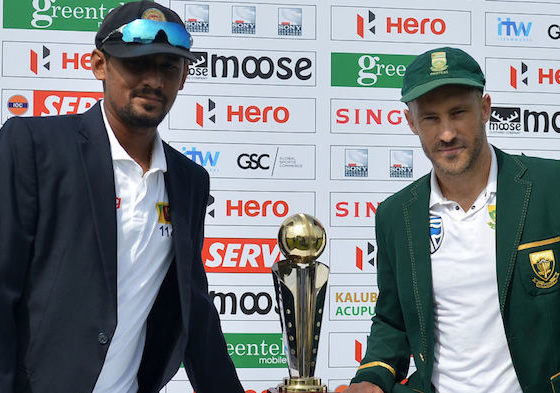 Your essential guide to the crucial second Test between the Proteas and Sri Lanka in Colombo.

The Proteas face a grueling task in Colombo. After losing the first Test in Galle by 278 runs, they will aim to end their Test duties against Sri Lanka on a high by drawing the two-match series.

The Proteas have only lost one Test series in Asia in the last 10 years, which came against India in 2015. This was also the last time they visited Asia and victory in Colombo will protect this positive record of two draws, one win and one defeat. A loss will result in consecutive defeats on the subcontinent.

It won’t be easy for Ottis Gibson and his troop. The Proteas will need to dig deep and change their batting approach after they were skittled for 126 and 73 in the first Test. Their performances were pathetic and they were schooled by Sri Lanka’s spin trio – Rangana Herath, Dilruwan Perera and Lakshan Sandakan – who took 17 of the 20 wickets to fall. Their game plan was notably flawed and the Proteas’ top six looked hopelessly unprepared to face spin, scoring a combined 128 runs over the two innings.

The nightmare will continue in Colombo if the Proteas have not effectively altered their approach and it is worrying that Proteas batting coach Dale Benkenstein believes that his players aren’t far off from beating the Sri Lankans on a spinner-friendly turf.

Nevertheless, there were a few positives to take from the defeat, one of which was Kagiso Rabada’s performance with the ball. The 23-year-old proved that conditions won’t deter him from making an impact as he took seven wickets in the match (4-50 and 3-44). Vernon Philander and Dale Steyn, however, were not as effective, which could persuade skipper Faf du Plessis and the management team to select an extra batsman to cover up their frailties against spin.

An extra spinner is another option facing the decision-makers, with Shaun von Berg waiting eagerly to make his Test debut in these spin-friendly conditions. The right-arm spinner could add variation to the Proteas’ left-arm spin duo of Tabraiz Shamsi and Keshav Maharaj. The pair were effective against Sri Lanka, Shamsi finishing with figures of 3-91 and 1-37 in the match while Maharaj – after going wicketless in the first innings – found his rhythm in the second, taking 4-58.

The difference in the first Test was undoubtedly Sri Lanka’s Dimuth Karunaratne. The opening batsman hit 158 not out and 60 in his two innings while the rest of the Sri Lanka batters struggled. This will be a concern for Sri Lanka as they aim for a whitewash against South Africa to repeat their 2006 2-0 series triumph.

Besides the Proteas’ batsmen needing to step up, Dale Steyn will be in the spotlight as he takes the final step needed to become the Proteas’ greatest Test bowler. The 35-year-old took his 421st wicket in the Sri Lankan second innings to draw level with Shaun Pollock, but this record is expected to be his alone during the second Test.

Hashim Amla is also on the brink of history, as he is just three runs shy of becoming the third South African to reach 9,000 Test runs. He is also just 257 runs short of becoming South Africa’s second-highest Test run-maker. It’s been over 10 months and 17 Test innings since his 132 against Bangladesh, during which he has scored 419 Test runs at 24.6, so a big innings in Colombo would be just what the doctor ordered.

– The highest score at the Sinhalese Sports Club Ground in Colombo came against South Africa, when Sri Lanka posted 756-5 in 2006, their highest total against the visitors.
– The last encounter between the two teams on the ground was a draw in 2014, when Amla scored what is still the highest score by a South African at the ground: 139 not out.
– Herath has 77 Test wickets at the ground.
– Amla is three runs away from becoming the third South African to reach 9,000 Test runs.
– The team that won the toss at the Sinhalese Sports Club Ground has won 12 of the Tests at the ground, with 14 drawn and lost 15.