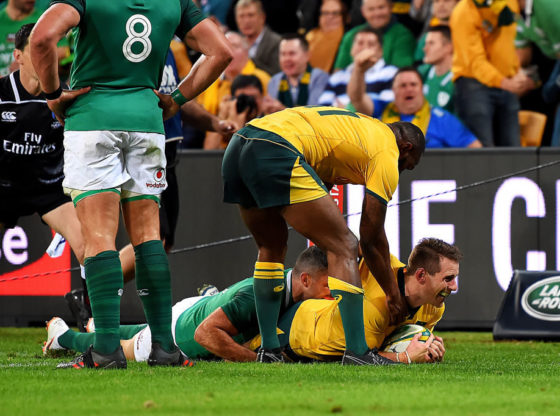 While the No 2-ranked Six Nations champions were widely expected to win their first match against the Wallabies in Australia since 1979, it was the hosts who drew first blood in this three-Test series.

This Test will be remembered as a war of attrition rather than a classic.

Bernard Foley slotted an early penalty for the Wallabies, but it was Ireland who dominated territory and possession in the first 15 minutes. The visitors coughed up the ball 5m out from Australia’s tryline but did get three points from the boot of Joey Carbery – who had started ahead of Johnny Sexton – to level the scores.

The Wallabies soon got themselves back into the game and looked set to score when Kurtley Beale broke through Robbie Henshaw’s tackle and put Marika Koroibete away down the left touchline. But Jacob Stockdale came across to make a brilliant try-saving cover tackle and Carbery’s second penalty put the visitors back in front.

However, Australia would take an 8-6 lead into half-time after scoring a 34th-minute try. Quick hands from the backs got the ball out wide to Dane Haylett-Petty, who straightened the line and passed to Samu Kerevi. The midfielder was brought to ground just short of the line, and Will Genia then put Foley over on the blind side.

Ireland made a strong start to the second half, with a 45m run from CJ Stander resulting in the No 8 being held up over the tryline. From the 5m scrum, the visitors took the ball through 19 phases before Pocock won a crucial ruck penalty for the hosts.

Carberry was off target with a penalty attempt soon afterwards, but he made no mistake in the 55th minute to put Ireland 9-8 ahead. The flyhalf was then replaced by Sexton.

The Wallabies thought they had responded with a try in the 61st minute that came after they tackled Bundee Aki and forced a turnover. Beale and Foley got the ball out to Israel Folau, who cantered over from 25m out. However, it was disallowed when the officials ruled that Adam Coleman had tackled James Ryan off the ball earlier on. It was a tough call, as Coleman had expected Ryan to receive the ball and it had had no impact on play.

Ireland replacement hooker Sean Cronin was then fortunate not to receive a yellow card for a neck roll on Pocock at a ruck.

A knock-on from Kerevi ended a promising 10-phase attack from the Wallabies, but their pack won a scrum penalty, which Foley sent through the posts to make it 11-9.

Australia swarmed onto the attack again after Folau had plucked Beale’s kick out of the air. They opted to tap a penalty from 5m out and Pocock crashed over eight phases later.

Ireland appeared to have scored a consolation try two minutes after the full-time hooter, through replacement Kieran Marmion, but it was ruled out when the officials spotted a knock-on earlier in the attack.