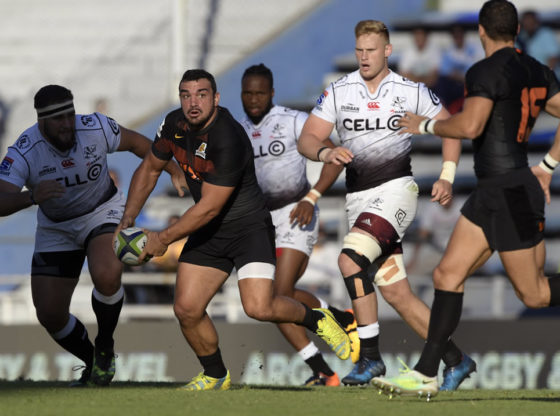 JON CARDINELLI looks ahead to the Super Rugby matches on Friday, including the Jaguares-Sharks fixture in Argentina.

CRUSADERS vs HURRICANES (Christchurch, Friday, 9.35am)

This is a massive game in the context of the New Zealand conference. The Crusaders currently sit at the top of the Kiwi log, and indeed the overall standings. The Hurricanes are in second place and a point behind the Crusaders, but have a game in hand.

A win for the Hurricanes could see the men from Wellington taking control at the top of the table. They have won 10 games in a row and, given their recent record against the Crusaders, they will fancy their chances of a victory in Christchurch.

The Crusaders may miss the influence of All Blacks Ryan Crotty and Sam Whitelock. The hosts’ ability to shut down Beauden Barrett’s space will hinge on their performances at the set pieces and collisions.

This promises to be one of the clashes of the regular season. All Blacks on both sides may be looking to impress the national selectors – in terms of nailing down starting positions – ahead of the coming series against France.

o The Hurricanes have won eight of their last 11 games against the Crusaders, including their last two meetings and a 29-19 victory when they met earlier this season.

o The Crusaders have won their last six New Zealand derbies at home; their last loss in such a fixture was in round 17, 2016 against the Hurricanes.

o The Hurricanes have won their last 10 games on the bounce; an 11th consecutive win would set a new franchise record for their longest winning streak in Super Rugby.

o The Hurricanes have conceded the fewest metres (354), beaten defenders (20), offloads (seven), and tries (two) per game of any team this season.

o Ben Lam has scored 14 tries in 10 games for the Hurricanes this season, including five tries in his last three games; he’s just one shy of equalling the record for most tries in a Super Rugby season last set by Ngani Laumape (15) last season.

REBELS vs SUNWOLVES (Melbourne, Friday, 11.45am)

The Sunwolves are on a roll. Sort of.

The Japan-based side scored historic wins against the Reds and Stormers in recent fixtures, and will have their tails up ahead of a clash against a battling Rebels side.

The Rebels have to win this game to keep their slim playoff hopes alive. The Sunwolves, however, will have more modest ambitions.

A win in Melbourne will help their cause as far as avoiding the tournament wooden spoon is concerned. They’ve never won away from home, though.

o The Rebels have won each of the last two meetings between these teams by a margin of 20-plus points, including a 37-17 win when they met in round three this season.

o The Rebels will be searching for back-to-back wins for the first time since winning their opening three games of the season after snatching a 27-24 win over the Brumbies in round 13.

o The Sunwolves have now won two games in a row to take their total Super Rugby win tally to five; however, they are yet to win from 19 fixtures as the away team.

o The Sunwolves (86%) boast the best goal-kicking accuracy of any team this season, while no team has been less accurate in front of the sticks than the Rebels (62%).

o Will Genia has made eight try assists this campaign; only the Lions’ Elton Jantjies (nine) has made more.

The Jaguares truly are on a hot winning streak. They won all four matches on their recent tour to Australasia, and thumped the Bulls 54-24 in the game played in Buenos Aires last Saturday.

They’ve now won five games on the bounce, and are well placed to qualify for the playoffs for the first time in their history.

The Sharks are at the opposite end of the spectrum in that they – like all of the South African teams – have been woefully inconsistent.

Robert du Preez’s charges beat a depleted Chiefs side in Durban last week. On the basis of their 2018 form, however, one wouldn’t bet on them backing that performance up with another dominant showing in Buenos Aires.

The Sharks have to win this Friday to keep the pressure on the Jaguares and Lions at the top of the South African conference. The players should be looking to impress Springbok coach Rassie Erasmus before the national squad is announced on Saturday evening.

No South African side has won in Argentina this season, though. The Lions leaked 49 points against the Jaguares in Buenos Aires earlier this year. The Bulls were hammered up front and cut to pieces out wide in last week’s game.

The Sharks should be more competitive. A win for the South Africans, however, may be regarded as an upset.

o The Sharks have won all of their previous four games against the Jaguares, each by a margin of no greater than eight points.

o The Jaguares have won their last five games on the bounce, of which three came after trailing at the half-time interval.

o The Sharks have lost six of their last seven games away from home; however, they have managed to pick up a losing bonus point in five of those six defeats.

o The Jaguares have kicked 10 penalty goals within the opening quarter of games this season, more than any other team in the competition.