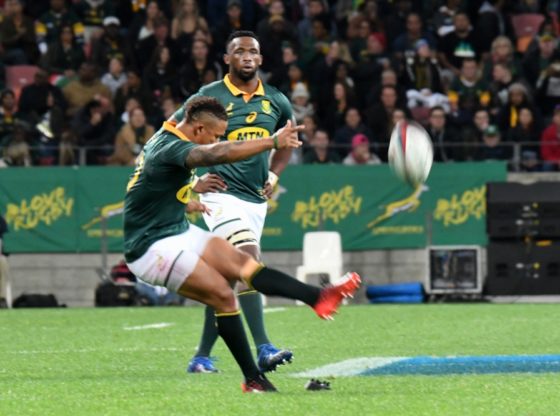 An ambitious Springbok side still has a lot to gain from the dead-rubber Test against England at Newlands on Saturday, writes JON CARDINELLI.

Rassie Erasmus looked more than a little relieved when he faced the media after the Boks beat England 23-12 – and clinched the series – at Free State Stadium last Saturday.

Erasmus has made a number of changes on the tactical and personnel front. Ultimately, the group has claimed two important results and ticked all the major boxes.

One game remains in this series, though. Erasmus and his opposite number Eddie Jones have made it clear that there will be plenty to play for when the teams clash at Newlands on Saturday.

Surprisingly, Jones has been all smiles since the recent defeat in Bloemfontein, and hasn’t been afraid to crack the odd joke. The British media, however, has failed to see the funny side of a 2018 record that includes six straight losses. The pressure on Jones and the team should continue to escalate until the tourists take to the field this weekend.

Jones has made several significant selections for the coming game. Danny Cipriani – who last started for England when the side suffered a record 42-6 hiding at the hands of the Boks at Twickenham in 2008 – has been backed at No 10.

England’s decision to set up camp in Durban and fly up to Johannesburg and Bloemfontein the day before the first and second Tests cost them dearly. In both of those contests, England fired in the first quarter only to lose momentum in the latter stages. Erasmus pointed out recently that England’s failure to adjust to the effects of altitude ultimately compromised the tourists’ performance.

The third and final Test will be staged at sea level. Conditions will be challenging, though, with rain and strong winds predicted for Saturday.

Which of these teams has the tools to use the conditions to their advantage?

Jones has been frank about his selection of Cipriani, and how the inclusion of another left-footer will see England going into the game with a host of tactical-kicking options. The Bok back-three should expect a number of high kicks and a fierce contest for possession in the air.

In one sense, this is exactly what Erasmus wants.

While Erasmus has set out to win this game, he has also highlighted the importance of giving a few of the youngsters and fringe players an opportunity to impress. The more pressure England applies, the more answers Erasmus will obtain regarding the abilities and mettle of certain players.

Indeed, a few of the more experienced players will have a point to prove. Handré Pollard has entrenched himself as the premier No 10 after delivering convincing tactical performances in the first two Tests. The Boks will need more than one good flyhalf option at the 2019 World Cup, though, and it will serve Erasmus’ long-term purposes if Elton Jantjies passes his wet-weather examination at Newlands this Saturday.

Where the Boks should have the edge is up front. In the past two Tests, South Africa have got the better of England at the set pieces and collisions. Erasmus has made one change to his starting pack this week, with Chiliboy Ralepelle slotting in at hooker, and one change in terms of forward reserves.

Erasmus got one over Jones with his excellent management of the substitutions last week. The Bok coach could have another trick up his sleeve when he deploys Schalk Brits from the bench at Newlands on Saturday.

The wet conditions might not be conducive to Brits’ natural running game. However, his knowledge of England’s set-piece systems – having spent the past nine years with England club Saracens – may boost the Boks later in the game.

Erasmus and a few of the fringe players have plenty to gain in the final match of the series. The South Africans don’t have much to lose.

The opposite is true for England, who stand on the brink of a sixth consecutive Test defeat. While a win at Newlands would end that rotten run, it wouldn’t change the fact that it’s been a terrible season for Jones’ side.

Preview: Wallabies vs Ireland (3rd Test)
England are the value bet at Newlands