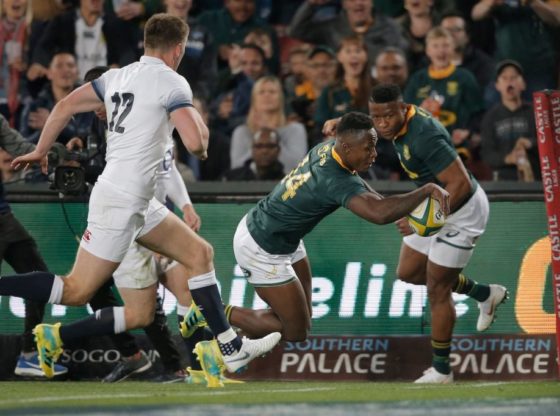 The Springboks fought back from 24-3 down to beat England 42-39 on Saturday and take a 1-0 lead in the three-Test series. JON CARDINELLI reports from Ellis Park.
S’bu Nkosi scored two of the Boks’ five tries on what was a thrilling evening for South African rugby. The new-look combinations took some time to gel. When the hosts got it right, they were simply unstoppable.

Siya Kolisi made history when he became the first black African to lead the Boks in a Test. The 26-year-old flanker was put to the test several times over the course of the contest.

The result marks England’s fourth-straight Test loss under coach Eddie Jones. The knives will be out for the England mentor after this performance. Indeed, fans on both sides will be wondering how England managed to throw the game away after leading 24-3 in the first quarter.

It was in that period of play where Rassie Erasmus’ worse nightmares came true. Despite most predictions, England opted to run at the Bok defence rather than test the rookie wings with a series of high bombs.

The ease with which they made metres was frightening. England found space in the midfield and in the wider channels, and racked up a 21-point lead. It was at that stage where a record hammering – and a dismal start to Erasmus’ season-proper – appeared to be on the cards.

The Boks, who were wanting for individual experience as well as established combinations, found a way to fight back. Duane Vermeulen was immense for the hosts at the breakdown, and scrumhalf Faf de Klerk capitalised on the quick ball provided by his forwards.

The Bok back three were absolutely devastating in the closing stages of the first stanza. Nkosi set up De Klerk’s try with a powerful run, and then scored two himself. Aphiwe Dyantyi, Willie le Roux and Nkosi combined beautifully for the right-wing’s second try.

COMMENT: Overseas Boks made their mark
The game was far tighter in the second half, with the Boks, in particular, looking to play for territory and extend their lead via the boot of Handré Pollard.

Mako Vunipola was sin-binned in the 63rd minute, and when Dyantyi scored soon after that, the game appeared to be the Boks’ to lose. England continued to fight in the dying stages, though, and the Boks were made to work for a narrow win.