All Blacks surge to resounding win 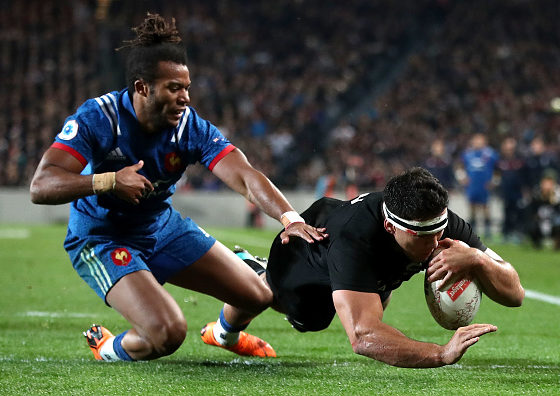 The All Blacks overturned a half-time deficit to claim a remarkable 52-11 win over France at Eden Park on Saturday. CRAIG LEWIS reports.

In many ways, this was another typical victory for the All Blacks. Despite producing a pedestrian first-half performance, they flicked a switch in the second stanza to score a whopping 44 unanswered points.

For all the fight France displayed to take a three-point half-time lead, they ultimately had no answer as the All Blacks hit their stride in the second period – running in seven tries to claim a 12th successive win over France, and extend their unbeaten record at Eden Park to 41 games.

The opening half was a highly-competitive affair, but it was France who took a most-deserved 11-8 lead into the break after producing a tenacious defensive effort over the first 40 minutes.

Although the All Blacks displayed glimpses of their ability in that opening stanza, there were also a number of uncharacteristic errors and a total of seven penalties, which enabled France to gain the upper hand.

Yet, as the All Blacks so often do, they upped the tempo in the second half and reaped the rewards, while they also received some fortune when French lock Paul Gabrillagues was sent to the sin bin for a high, but hardly dangerous tackle.

In his absence, the All Blacks scored through Codie Taylor and Ben Smith to suddenly shoot into a commanding 25-11 lead, while Rieko Ioane dotted down just after the hour mark to ensure there would be no way back for the French.

From there, the hosts just kept their collective foot on the accelerator as Damian McKenzie, Ngani Laumape, Ioane and Ardie Savea extended the try-scoring tally.